2021 Toyota Landcruiser Review: What to Expect The Toyota Landcruiser is one of the most popular large 4WDs in Australia, this is due to the model’s reliability and legendary reputation as an off-roader.

Toyota first launched the Landcruiser back in 1957, mainly appearing as a modest and functional off-road tool. It split into two different lines 10 years after. One remained as a straightforward utilitarian vehicle, while the other adopted a luxurious design more passenger-oriented.

Nowadays, these vehicles are known as the 70 Series and 200 Series, respectively, but they remain dedicated to the original design principles.

In this review, we look over everything the Landcruiser 200 has to offer. This SUV  has several models available, ranging from a simple yet exceptional off-roader to a premium model with additional unique features. There aren’t many crucial distinctions between the GX, GXL, VX, and Sahara 200 Series models regarding performance. Instead, they differ primarily on features and available technologies.

Let’s put aside for a minute things such as performance and efficiency. The effortless power that the 381-hp V8 diesel engine outputs gives the Landcruiser remarkable performance.

Although many manufacturers try to replicate its feeling on smaller engines through smart technologies, they can’t match its capacity or smoothness. In fact, it may be the very reason why the Toyota Landcruiser is such a popular car.

All Toyota Landcruiser models except one, the GX, have three rows of seats and a horizontally split tailgate. The interior design does fall a little short of its competitors, but the presence of trail-ready equipment, such as a locking centre differential and two-speed transfer case, makes up for it.

Overall, the Landcruiser is robust and hugely capable. It may occasionally come across as more luxurious and costly than adventurous, but it has numerous technologies and characteristics that warrant its price tag. Nevertheless, although its competitors might seem somewhat better for the same price, the Toyota Landcruiser is more capable than most.

The Land Cruiser’s engine is powered with a 4.5-litre V8 turbo diesel engine paired with a six-speed transmission. This full-time four-wheel-drive setup can output a max torque of 650/1600-2600 Nm/rpm and 381 horsepower.

Driving it feels considerably smooth and well-planted. It provides a comfortable experience the entire time you’re behind the wheel. The steering is light, but it does have a notable body roll. It’s one of its detriments as other SUV options at the same price range offer slightly better handling.

Regardless, while the Landcruiser has a hulky exterior, it has a pretty fast start. It can also tow up to 3500 kilograms. The number is quite significant as it’s only barely lower than a couple of other cars, such as the Chevy Tahoe and the Ford Expedition equipped with a Heavy-Duty Trailer Tow Package.

Regarding fuel economy, the Toyota Landcruiser has a 138-litre fuel tank capacity and consumes a significantly hefty amount due to its sheer size. The specification sheet states that it consumes 9.5 litres every 100 kilometres, but the figure was higher in practice. This number is the combined fuel consumption, which balances the city and highway amounts.

However, riding it on a highway, through the city, and slightly off roads results in a fuel consumption of 11.5 litres per 100 kilometres, closer to an urban figure. 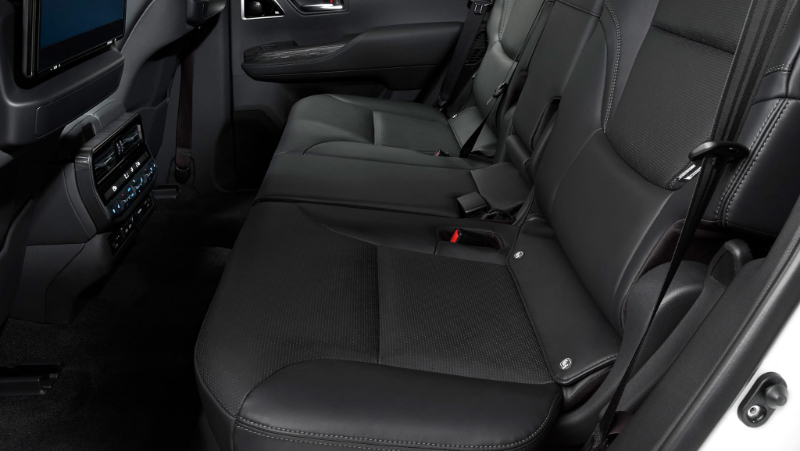 As far as the cabin is concerned, the Toyota Land Cruiser focuses on execution. There’s considerable attention to details in the interior. It isn’t too visually opulent or luxurious as other models, but it employs the finest materials in its design.

The build quality is remarkable. When you move every knob and switch, you can feel a heftiness conveying a superb value. It also has several storage options throughout the cabin that are more useful than they appear.

The front seats have excellent accommodations and impressive sightlines. Meanwhile, the second row and third row provide ample room for its passengers.

Every Land Cruiser other than the GX comes with three rows of seats. The GXL can fit eight people inside, and the VX and Sahara can accommodate seven. It does come at the cost of cargo space, but it can manage a decent load.

Accessing any third-row seat is easier with the Land Cruiser than in most other SUV models. It has large door openings and well-placed handles that help. Still, it would be better if the third row had electrically operated controllers.

The inside of the Toyota Land Cruiser lacks a couple of modern features because it doesn’t bend to current standards. However, every inch of it is designed with care and high-quality materials. As a result, it’s dated but practical and comfortable. 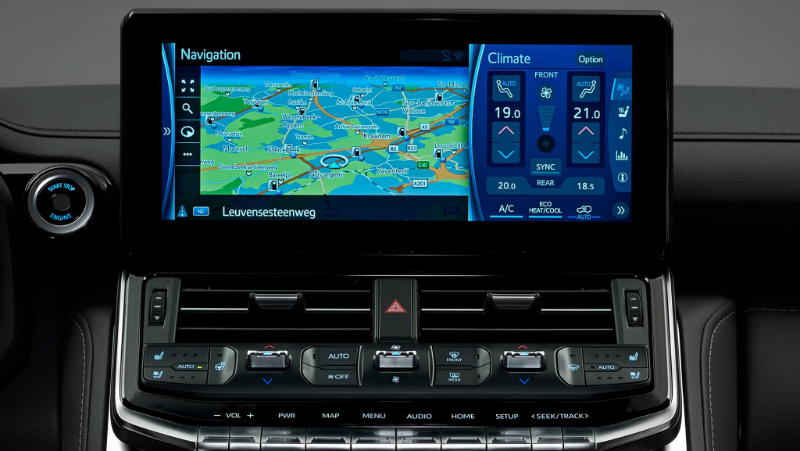 The Toyota Land Cruiser has many excellent tech features that offer plenty of connectivity. For example, every model comes with standard Bluetooth capabilities that facilitate hands-free phone calls behind the wheel.

They also come with a wireless charging device and a single disc 6.1-inch touchscreen with satellite navigation and infotainment system. Other standard features are a JBL sound system with 14 speakers and satellite radio.

You also get a dual-zone climate control system that lets you set different temperatures in each part of the cabin and a proximity key that enables you to unlock and start the car with your key safe in a pocket or bag.

One optional feature of the Land Cruiser GXL is Toyota’s KDSS (Kinetic Dynamic Suspension System.) It allows you to experience flat handling while your car is on the roads and ample axle articulation while off the road. The VX and Sahara both come with this KDSS by default.

If you decide to spend more to acquire the VX, you can get an Electro Multi Vision with a 9.0-inch touchscreen. It also has rain-sensing wipers, automatically dimming interior door mirrors, four-zone climate control, and a multi-terrain monitor that’s significantly helpful for off-road driving.

This monitor uses four cameras that show you terrain obstacles from a wheels’ point of view that you wouldn’t usually be able to see.

This car also has a multi-terrain monitor that’s significantly helpful for off-road driving. It uses four cameras that show you terrain obstacles from a wheels’ point of view that would normally be obscured.

The Toyota Land Cruiser Sahara has every better characteristic of the previous cars and more. It has an outer heated second and front seats, ventilated front seats, and a dual rear seat 11.6-inch entertainment system. 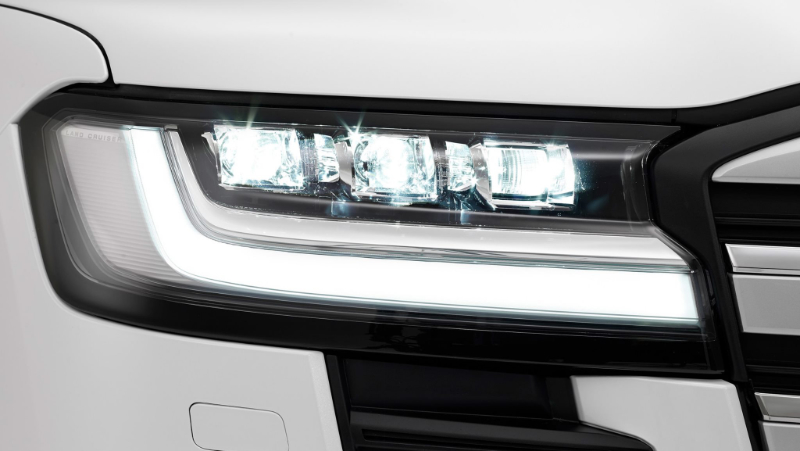 Every Toyota Land Cruiser model has some standard driver-assistance tech and other essential safety features, including cruise control and side curtain airbags.

The Land Cruiser GXL and further models have these safety features:

Most Toyota Land Cruiser accessories are available for every model at a modest price. All of them are for the vehicle’s exterior, and they are:

The only difference is that you can customize the colour of the bull bar with the GXL, VX, and Sahara, and you can opt to install 18-inch alloy wheels.

Which Toyota Land Cruiser Model Should You Buy?

The Land Cruiser is an extraordinary car with an excellent on-and-off-road capability, especially if you compare them with any other sizeable non-prestigious SUV.

When considering the model, the first thing you have to work out is how much money you’re willing to spend. If you don’t care much for technology or the cabin’s design, then the GX is not only the best option for you but the most cost-effective.

It’s an excellent car for people in rural areas as well. The vinyl flooring it has is easier to clean and maintain than the carpet of the more costly options.

If you’re considering the GXL, VX, and the Sahara Land Cruiser, it mostly comes down to which technologies or characteristics you wish to have. For instance, if you want the 9.0-inch Electro Multi Vision LCD touchscreen to enjoy TV programs while stationary, you have to get either the VX or Sahara.

Still, these three are great for people with large families as they can fit seven or eight passengers at a time, thanks to the third-row seats. In addition, they have excellent safety measures.

Toyota’s warranty coverage is the same for every car and pretty standard compared to other brands. However, hardly anyone needs to rectify their vehicle, considering how capable and reliable they are. Regardless, their unlimited-kilometre warranty lasts five years and covers every part that Toyota made.

Is a Toyota Land Cruiser a Good Investment? The Toyota Land Cruiser is a capable car that’s comfortable to handle. Although it has a dated V8 diesel engine with a six-speed transmission, this SUV still offers an excellent driving experience both on roads and off roads.

Sure, there’s some slight body roll, and the car’s fuel economy isn’t good by any means, but it makes up for it with its range of features.

If you’re considering getting a new car, the Toyota Land Cruiser can be a great investment. You can purchase a used 2021 Toyota Landcruiser at Westside Auto and enjoy a ride with low kilometres at a fraction of the price.

According to several car reviews and our own, the 2021 Toyota Land Cruiser is an excellent SUV and it has a variety of models for sale with distinct features. So if you’re looking for one check out our current stock today.