Things You Should Know Before Buying a Toyota FJ Cruiser 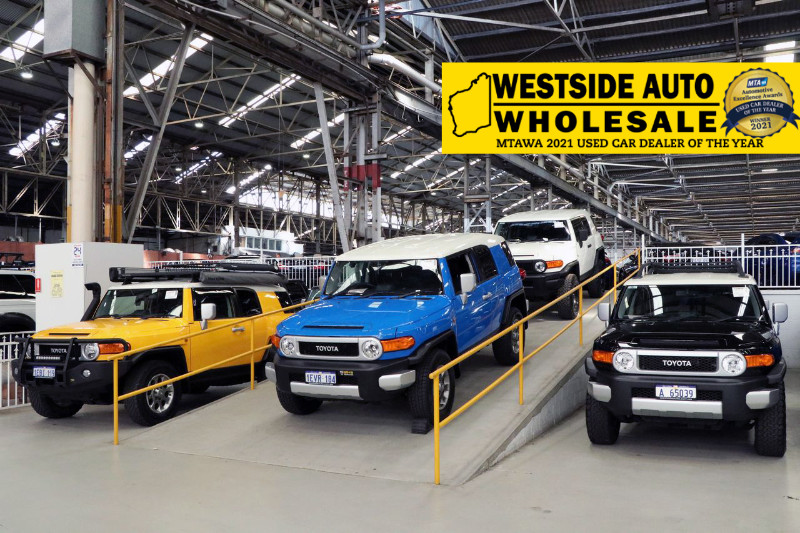 Initially introduced in 2003 as a concept car, the Toyota FJ Cruiser started production after tons of positive feedback. In fact, Toyota promised to offer this unique USV as a one-generation model. Now that it has halted production, there are only a few FJ Cruisers out there, and they’re pricey and hot if you can find them. Start your search here At Westside Auto Wholesale we currently have a large number of Toyota Fj Cruisers in stock.

During production, the FJ Cruiser looked quirky and was a low-volume selling product. On average, Toyota only sold 20,000 units per year, but there were quite a few sold in Australia. Finding an FJ Cruiser for sale now is quite rare. For example, a 2014 model might cost over $30,000!

You need to know that this vehicle has a high price range because there are few of them out there. As a driver, fuel consumption is key. Buying used means focusing on what the model looks like and all the rest. Here’s what you should know about the Toyota FJ Cruiser:

Many people have asked about the Toyota FJ Cruiser and its origins. It has roots in the legendary Toyota series. The “F” focuses on the engine type and the “J” stands for Jeep. Earlier FJ Cruiser vehicles were recognized and called BJs because they ran on a B-type engine and not the F-type engine. The Cruiser part of the name came from the popular FJ40 Land Cruiser, which was a 60’s off-road model ranked as the best-seller for Toyota in many countries.

Don’t be mistaken about the Toyota FJ Cruiser models, though. The looks aren’t even close to the other FJ models and series from Toyota. In fact, the FJ Cruiser is a modified and modern version with better features and more comfort.

Made of Stern Stuff

You need to know that Toyota’s dependability has been proven throughout the years. Most FJ Cruiser owners talk about how easy it is to run and maintain them. Looking at the FJ Series of cars from Toyota, they’re popular because they don’t break down. This explains why antic and authentic FJs are still running today.

When it comes to the suspension and transmission of the Toyota FJ Cruiser, the quality is legendary. You can find a five-speed automatic with rear-wheel drive. Plus, the electrical system can take anything. With that, the Cruiser has unmatched durability, considering that it takes a beating and goes off-road.

Many automakers go for that turbo-diesel and petrol engines differing in size and layout (V6, V8, and 4-cylinder engines). However, Toyota went straight with its FJ Cruiser. It only offers one option – the 4.0-litre V6 engine. Though the specs aren’t that impressive, you need to know that it runs well. Still, it only delivers 260 horsepower.

Those specs aren’t that great, but the secret focuses on how it delivers its power and torque. 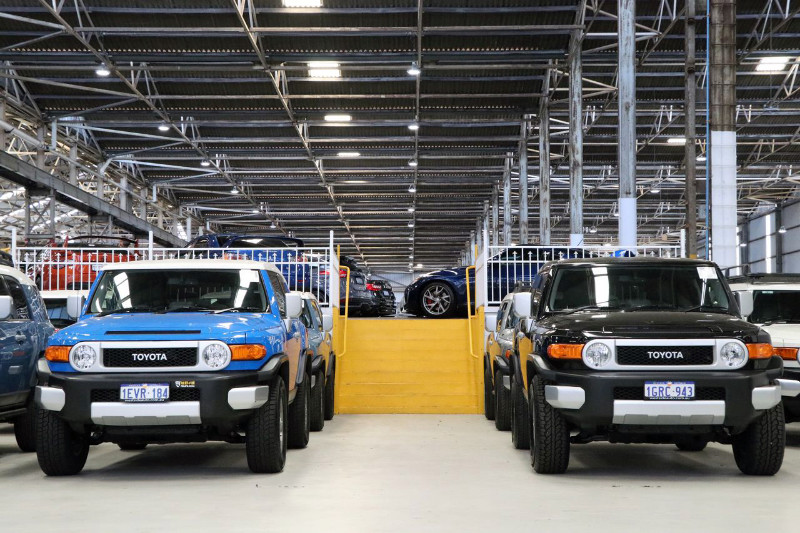 Toyota chose to kill production of its FJ Cruiser after a single generation. To mark the final production year of the Toyota FJ Cruiser, it announced the Trail Team Ultimate Edition at a special US show. Only 2,500 units were built.

Despite there only being one vehicle model, Toyota did offer the FJ cruiser in various colors. Body colors aside, every driver could pick and choose what they wanted from their model.

You need to know that customisation focused solely on the owners of the vehicles. The Toyota FJ Cruiser is an easy-to-customise SUV with aftermarket custom kits and custom accessories.

Buyers should understand that a Toyota FJ Cruiser with various dealer-fitted accessories costs more than standard options. With that, retro styling also costs more, so if you find a vehicle like that, be prepared to spend a little extra to own it.

Some of the customisation options for the Toyota FJ Cruiser include:

The market is full of these changes, which bumps up the price but seems to be worth it in the end.

Compared to other off-road Toyotas out there, the FJ Cruiser isn’t as big. The exterior dimensions are lower and shorter than the Prado. Since there are low-end dimensions, this also indicates that there are a smaller boot space and cargo storage capacity with it.

The body of the vehicle looks great and gives you a sense of what’s inside. You also get air conditioning, Bluetooth, keyless entry, and other things that most modern cars have. Though they aren’t equipped with Car-Play from Apple, they’re still amazing options. 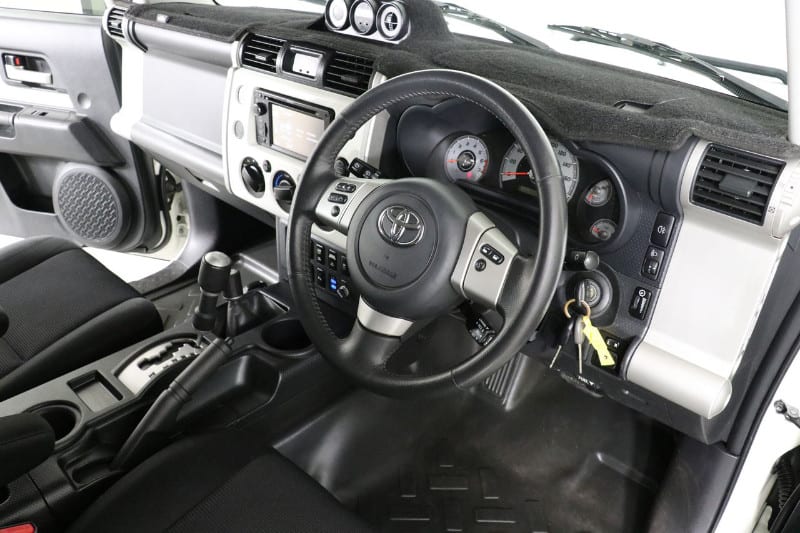 Off-roaders like this often guzzle fuel like crazy, especially when compared to a smaller car. Powered by a V6 engine, it only offers 18 mpg consumption, which is quite scary. Still, it provides great off-roading performance because of the high ground clearance. In fact, the ground clearance is 224mm (700mm wading depth). More recent models offered an extra fuel tank with the CRAWL off-road system.

On the highway, though, the Toyota FJ Cruiser is a mixed bag. Curb weight ensures good performance, but that’s a disadvantage for speed because it takes 15 seconds to get a quarter of a mile.

As a driver, however, you’re sure to appreciate the rear coil-spring suspension and independent suspension in the front.

This SUV isn’t the top for safety, but it contains front and side air-bags with curtain bags to protect everyone inside the car.

Most people need to know and focus heavily on the safety features. With this SUV, you have a reverse camera, brake assist, front head restraints, electronic traction/stability control, and brake force distribution.

This off-roading monster offers a towing capacity of about 5,000 pounds, which falls a bit short for tow ratings of today’s standards. However, the FJ is lighter, which can be a good thing unless you’re hauling a lot. Even so, the pulling capacity is decent. You can tell because of how many Cruisers are fitted with tow bars.

For better off-road capabilities, the FJ was fitted with the 4WD system. Most other soft-roaders use an AWD system. This car offers a dual battery feature, too.

Conclusion on the FJ Cruiser

Those who want reliability and need more than a car are sure to appreciate the FJ Cruiser. Its body is rugged, steering is easy, and you have more control. Though it eats fuel, Toyota fixed various problems, such as cracks along the B-pillar when opening the doors.

With that, there could be steering column flaws on the 2013 version. You need to know the price range, but these are great vehicles! Start your FJ Cruiser search at Westside Auto wholesale today, contact our sales team to organise a test drive or for further information. 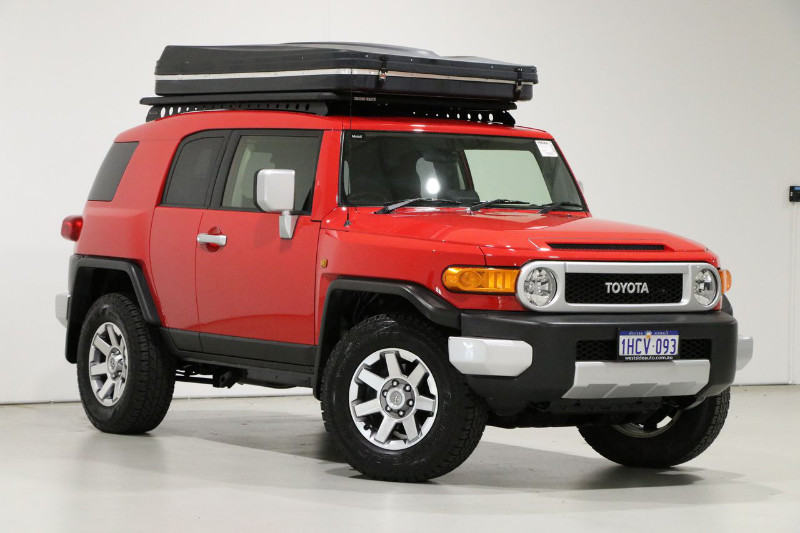