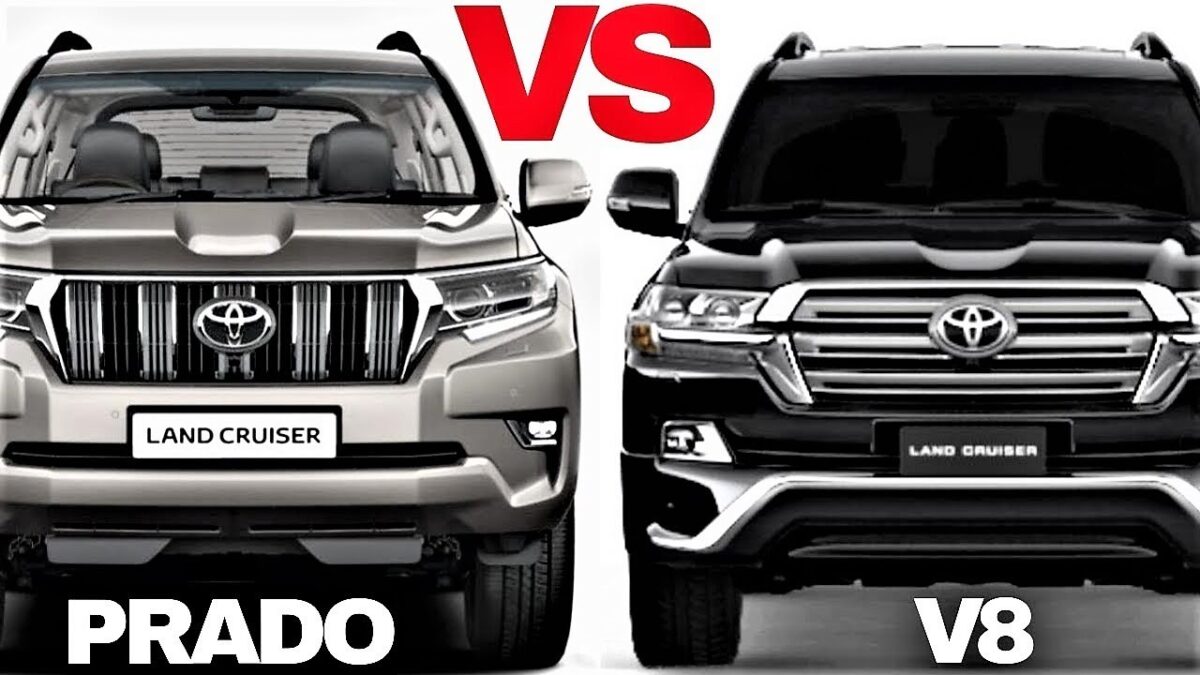 Toyota is a trusted brand well-renowned for their excellent automobiles. Naturally, some people have difficulty in choosing which model to get from Toyota. In today’s blog, we are going to cover both the Toyota Landcruiser and Toyota Prado. Toyota Landcruiser & Prado comparisons are necessary to distinguish the advantages and disadvantages that each model may bring to a person like you. Simple yet effective, no?

Starting off the comparison between the two vehicles, this automobile is often regarded as one of the kings of four-wheel SUVs. Officially, you might see it spelled out as Land Cruiser in some dealerships. Its diesel engine is 4461cc, with eight cylinders in V-shape four valves/cylinder, and a dual overhead camshaft. Its engine is a V8, which makes its horsepower quite impressive compared to other similarly-sized vehicles. It’s an impressively powerful automobile with max horsepower of 262 bhp at 3400 RPM and a max torque of 650 Nm at 1600 RPM!  It also has an automatic six-speed transmission with a rear suspension that’s four-link with a coil spring. That’s a lot of technical stuff to consider all at once, so a quick summarisation is necessary.

Essentially, the Land Cruiser is a powerhouse both on roads and off them. It’s reliable, strong and is overall worth considering for anybody in need of a new automobile. We love it, and I think Toyota knocked it off the ballpark with this sublime vehicle! The Land Cruiser can go anywhere you need it to go to, so what’s not to love about it? Regardless, this blog also focuses on comparing it to the Prado, so let’s see how that fares by comparison.

By comparison to its larger counterpart, the Prado is a mid-sized SUV. It’s noticeably weaker engine contains a 2982cc with a four-cylinder inline four valves/cylinder, and also a dual overhead camshaft just like the Land Cruiser. Both operate on diesel, yet there are differences involving its performance. While both run on diesel fuel, this car has noticeably lower horsepower and torque at 171 bhp at 3400 RPM and 410 Nm at 1600 RPM, respectively. It uses an automatic five-speed transmission gear, so it technically has fewer options to work with compared to the Land Cruiser. Also, before I forget to mention, its engine isn’t a V8. Instead, it’s a four-cylinder inline diesel engine.

At first glance, it may seem as though the Toyota Prado is entirely inferior to the Land Cruiser in every way. There are other missing features that the Land Cruiser has, such as adjustable armrests and a speed-sensing door lock. Some aspects the Prado is better at also seems incredibly minor, such as a 0.1-meter improvement in its minimum turning radius. The main advantage it can claim over a Land Cruiser is that it’s cheaper and smaller, which may be more suitable for some households.

Other than both models being made by Toyota (pretty obvious comparison in all honesty), there are other noteworthy similarities between them. Both models use a parking assist that utilizes a reverse camera for guidance. Both vehicles also use rear seat parking sensors to make this aspect work. The Land Cruiser and Prado also operate similarly in some categories, with the former just being 5mm higher than the latter in ground clearance. Front and rear brakes also work nigh identically.

Turbo diesel is present on both vehicles. Turbo diesel is essentially diesel that utilises turbochargers and both models possess this ability. In addition to such features is its fancy turbo diesel engine is the dual-zone climate present in both automobiles. However, I must note that the Land Cruiser has a minor advantage in having an automatic four-zone over the Prado’s automatic three-zone. Fortunately, both possess a third row AC vent on the roof along with a spare wheel. Alloy wheels allow a driver to accelerate quicker and make faster stops. Honestly, I prefer alloy wheels over other wheel types, so that’s a massive plus to both automobiles in my eyes.

Aside from that, both cars utilize rear disc brakes. The Land Cruiser’s rear tire measures at 285 / 60 R18 while the Prado’s tires measure up at 265/ 60 R18. Pretty similar, albeit the difference may be noticeable to more experienced drivers. Finally, both versions offer cruise control for those who enjoy it.

Now, we’ve gone over some minor similarities and the various differences associated with these two brands. Now the question remains: which one is better? Unsurprisingly, the Land Cruiser is the overall better automobile. Yeah, We get that it’s more expensive, but its power is unparalleled by comparison! Both operate on turbo diesel, yet the V8 engine and extra horsepower give the Land Cruiser the necessary edge to be considered the better of the two. A diesel fuel tank is easy to manage, so the extra power won’t hold a person back if they’re concerned about maintaining a behemoth of a vehicle like the Land Cruiser.

Also, the Landcruiser’s airbags help make it stand out compared to the Prado’s. Two rear airbags on the passenger side, in addition to eight other airbags? Ten overall airbags can definitely make a person feel safer than seven airbags, none of which is on the rear passenger side. Both rear AC operates similarly and both rear parking sensors can make some of the differences seem more minor. Nonetheless, the main advantages lie in the Landcruiser’s favour.

Now that we’ve established the Land Cruiser is the better of the two, we need to figure out how it compares to the rest of the market. Compared to something like a Land Rover, we would say that the Toyota Land Cruiser is the better option. Sure, the Land Rover is a great car but the Land Cruiser is an awesome one! The Rover may have better fuel efficiency compared to the Landcruiser’s fuel tank but you cannot underestimate the latter’s superior space and power. As far as other automobiles go, many other vehicles are too different to compare in a short summary. Nonetheless, the Landcruiser’s exceptional cruise control, rear sensors, horsepower and torque make it an outstanding automobile we can recommend it to all of our customers.

Ultimately, this blog was initially about the Landcruiser’s similarities and differences with the Prado. Both automobiles are a worthwhile investment but the former is undoubtedly the better option between the two. With a superior engine, power, and better overall miscellaneous features, comparing the two does seem a tad unfair. Nonetheless, I hope these comparisons can assist you in whatever decision you might make in the future involving the two.