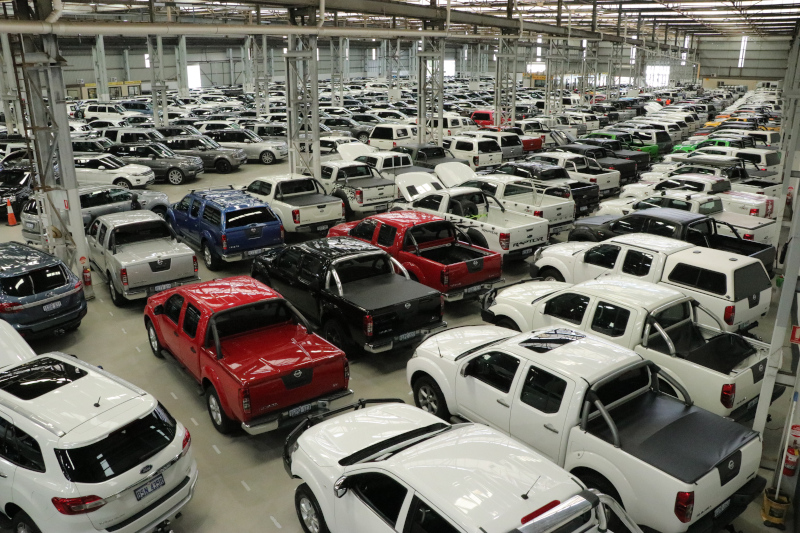 Utilities are a dominant force in the new car sales market with the Ford Ranger and Toyota Hilux positioned as the top two selling new vehicles in the country.

The Hilux is rarely toppled as the leader of overall vehicles sold, but the Ford Ranger did take top spot in September 2017.

Toyota coins its Hilux product as the ‘unbreakable’ vehicle. Toyota’s marketing prowess, combined with the quality reputation of its brand has helped power the Hilux to top spot three years in a row. It currently positioned to take top spot in 2018 too.

Since July 2015, each Hilux variant features a 5-star safety rating, which is the highest possible safety rating you can get on a vehicle.

In 2018, Toyota has added to the Hilux range with three new distinguishable models – the Rugged, Rugged X and Rogue. These recently released models are available in diesel 4×4 variants only. The Rogue is available in an automatic gear box only.

The SR, SR5 and Workmate models are not going to be replaced by the new products Toyota has brought out. This means you will still have the choice of a petrol variant in the Workmate, as well as 4×2 or 4×4 drivetrains in the Workmate, SR and SR5. Manual and automatic transmissions are available in all of the main models listed.

Aside from the Workmate petrol engine, all Hilux diesel models feature a 2.8-litre, turbo-charged 4-cylinder engine.

The Hilux has an excellent reputation and following, which helps to make it one of best vehicles for holding value and resale in the nation.

At Westside Auto Wholesale, we are proud to stock a large number of Hilux vehicles – you will find single-cabs, extra-cabs and dual-cabs across different price points.

The Ford Ranger took the honours last year of being the best selling 4×4 vehicle on the Australian market. It also challenged the Hilux for top spot, finishing up second overall for the total number of vehicles sold in 2017. Toyota took the honours of top spot due to the large amount of 4×2 Hilux vehicles sold.

The Ranger has two engine variants available with consumers having the choice of a 4-cylinder, 2.2 litre engine and a 3.2 litre, 5-cylinder engine. Both of these variants are in diesel-turbo – no petrol option is available in the 2018 Ranger vehicles.

There are 5 Ranger models to choose from: the XL, XL Plus, XLT, XLS and Wildtrak. Each of these models will differ in terms of trim and electronic features. The base model is the XL and the top-of-the-range model is the Wildtrak.

Just like the Hilux, there are options of 4×2 (low-rider and high-rider) and 4×4 drive trains. You also have the choice of automatic and manual gearboxes in the majority of models.

The Ranger features a 5-star safety rating across its models.

Westside Auto Wholesale has a huge number of Ranger vehicles in stock – some are particularly unique in their design and some will feature thousands of dollars in add-on accessories.

The Triton has excellent price appeal with its top-of-the-range Exceed model standing as one of the best value-for-money utilities on the market. In comparison to Mitsubishi’s competitors, the Exceed Triton is up to $20k cheaper than other manufacturers’ best product.

Does a cheaper utility mean a less safe vehicle? Absolutely not – the Triton is backed with a 5-star ANCAP safety rating across all its products – this has been the case since April 2015.

Compared to Mitsubishi’s competitors in the utility market, the Triton is generally a smaller vehicle. As a direct comparison with the Ford Ranger Wildtrak, the Exceed Triton is 75mm shorter, 295kg lighter and 45mm narrower. The towing capacity is also less than its major competitors as it has a maximum pull of 3-ton braked.

There is a variety of variants in the Triton, and Mitsubishi gives consumers the choice of petrol or diesel in the GLX single-cab model. There is a total of 5 models to choose from: GLX, GLX +, GLS, Blackline and Exceed. There is also the choice of a 4×2 or 4×4 drivetrain in the GLX model. Manual and auto is available on the majority of models listed above.

Westside Auto Wholesale has an excellent range of Triton vehicles to choose from.

It was a successful year in 2017 for the Holden Colorado utility as new car sales finished up 17.3% on the previous year.

There are four different models to choose from in the Colorado range: LS, LT, LSX and Z71. The LS is regarded as the base model in the mix and the Z71 is regarded as the top-of-the-range model.  You can purchase the Colorado in a 4×4 or 4×2 variant, as well as a manual or automatic transmission. The option of a 4×2 drivetrain is not available in the Z71 vehicle.

Just like the Ranger, you can only buy the Colorado in a diesel-turbo engine. All engines are 4-cylinder, 2.8-litre capacity. The 2018 Colorado matches the 3.5-ton braked towing capacity of its major competitors.

Since 2016, the Colorado has had a 5-star ANCAP safety rating across all of its utility range.

On the base model of the Colorado, you will find good, modern car technology such as Apple Car Play, Android Auto, digital radio, Bluetooth and LED daytime lights.

If you have purchased a Colorado after July 2018, you can expect a 5-year, unlimited kilometre warranty. Pre July, it is three-years, 100,000 kilometres. The new 5-year warranty product Holden for its Colorado offers is class-leading.

Westside Auto Wholesale is proud to have a big range of unique Colorado vehicles.

Coming in at 5th place for new utility sales in 2017 was the Isuzu D-Max. Just like the other manufacturers, the D-Max also had a healthy increase of new car sales in 2017 with over 1000 more vehicles sold on the previous year.

There are four variants in the D-Max range: SX, LS-M, LS-U and LS-T. You will find 4×4 and 4×2 options as well as automatic or manual gearboxes in the majority of D-Max vehicles.

The D-Max matches four out of the the five competitors listed with a 3.5-ton braked towing capacity across the majority of its range.

Isuzu has opted to stick with diesel across its whole range with a 3.0 turbo-charged engine coming standard with each model.

Since November 2016, the D-Max has featured a five-star safety rating across its full range.

The warranty on the D-Max is 5-year, 130,000 kilometres – whichever comes first applies. Out of the vehicles reviewed here, the D-Max warranty finishes in second place.