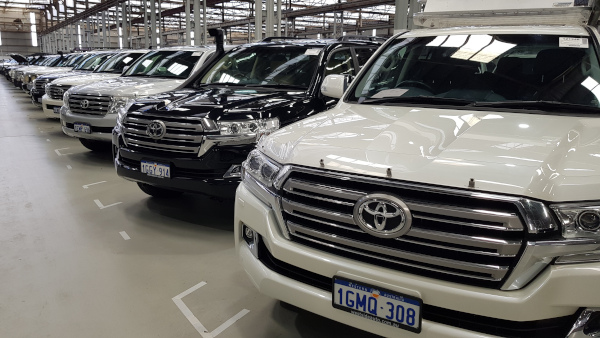 The 200 Series Toyota Landcruiser is one of Australia’s most sought-after vehicles due to its strong holding value, versatility and reliability.

Since the introduction of the 200 Series in 2007, Toyota has continually updated its technology to improve fuel efficiency and performance.

Toyota offers the 200 Series in a twin-turbo diesel V8 as well as a naturally aspirated V8 petrol. The engine specifications are kept the same across the 200 Series range, however, there are unique differences to the trim and technology

Below is information which will help you understand the key differences between each of the models.

The 200 Series GX first came out in 2011. Since then, it is recognised as the base model in the Landcruiser range. It appeals to those who aren’t so concerned with the creature comforts as it is the only 200 Series to feature rubber flooring. In comparison to the other models, it features more basic technology. You will find GPS and Bluetooth standard in the 2018 model, however. Brand-new, you can expect to pay approximately $86,517 drive-away for the GX model (WA pricing).

You can only purchase the GX model in a twin-turbo diesel variant.

The GXL finds the sweet spot in the 200 Series range. It’s a clear step-up in technology, and the interior is a combination of carpet and cloth.   It stands as one of the best-selling vehicles in our warehouse. Brand-new, the GXL will cost around $5,600 more than the GX model (WA pricing).

Features that the GXL has over the GX (2018 model)

The VX is the first vehicle in the 200 Series range to feature significant tech and luxury features. It isn’t quite the top product in the 200 Series range, but it has key luxury and tech features that the GXL doesn’t have. Based on brand new RRP, you will pay just under $11,000 to have the VX luxuries over the GXL (WA pricing).

Some of the key ones are below:

At the very top end of town the Landcruiser Sahara serves you with the best technology and creature comforts Toyota has to offer. It Western Australia, the Sahara retails for over $120,000 brand-new, and like the GXL, it is one of the best-selling products we have at Westside Auto Wholesale.

The Sahara retails for around $23,000 more than the VX model (WA pricing). The price difference is largely attributed to the advanced driver safety features, which are excluded on the VX.

Extra features the Sahara includes are:

Which model do I choose?

Aside from how much money you are willing to spend, you must work out what you value the most out of the 200 Series. For those that are purely interested in the Landcruiser for its off-roading capability and not so much the technology or inside interior, the GX is going to be the most cost-effective option. It can also be a good option for those in rural areas where dirt and red dust makes it harder to keep the interior clean. The rubber flooring on the GX is easier to maintain in comparison to the carpet on the more expensive models.

Choosing between the other three main options ultimately comes down to how much technology you want, and also your fabric preference.

In the used car market, you will find many 200 Series to choose from – the price of each vehicle will depend on kilometres and age as well as any added accessories.

To search through our amazing range of 200 Series vehicles, click on this link.

Disclaimer: recommended retail pricing in this article is based on location and Toyota’s listed pricing at the time published.